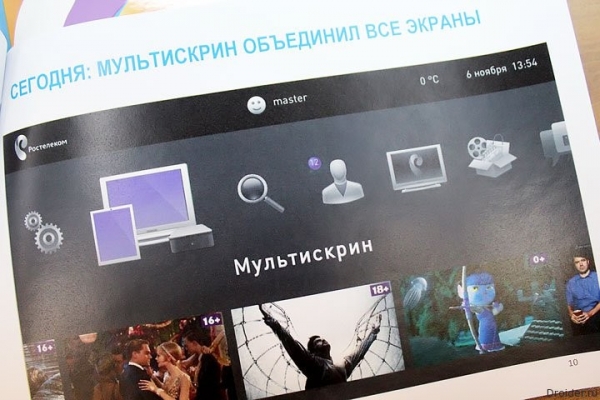 "Rostelecom" company launched a new service "Multiskrin" by which users can combine with each other to 5 gadgets and each of them to view video content.

It is noteworthy that the newly service is not available

only for subscribers "Rostelecom".

"In the first place," Multiskrin "is relevant to mobile people who value their time and are not ready to adapt to the TV program. On the other hand, we tried to make the service so that they could enjoy the widest possible audience, "- says Maxim Kudryavtsev, the representative of" Rostelecom ".

According to the official announcement, traffic is automatically adjusted to the specifications of the device. Recommended connection speed - 2.5 Mb / s. Service "Multiskrin" free of charge.

After authorization subscriber will receive full access to all content acquired on any device. Also will be able to purchase content from any device and it will automatically be available on other screens. Will soon be available for authorization using the popular social networking account (you will need to "link" account and an account of social networks), "- said in a press release.

Flashing smartphone may be outlawed
The range of Samsung Galaxy Tab will get Android 4.0 in July
The official release of HTC One X +
[MWC 2013] Qualcomm Snapdragon 800 - The top chip in action!
Aquos Pad SHT22 - 7-inch tablet from Sharp with a thin frame
Read 4311 times
back to top